About The Burning Spear 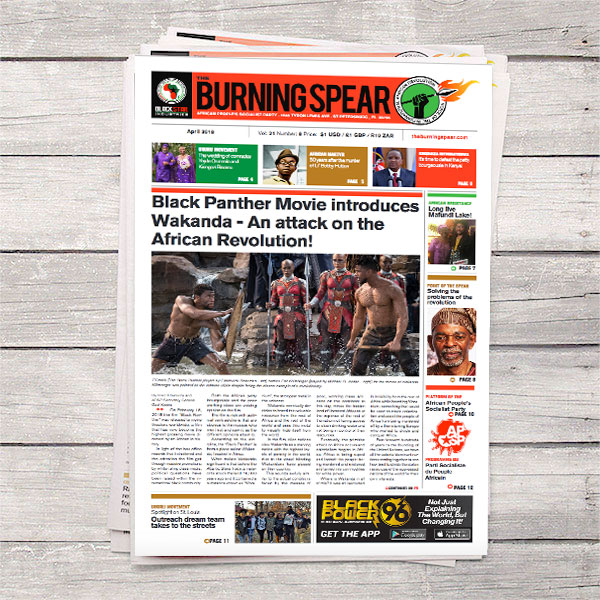 The Burning Spear newspaper is the official press of the African People's Socialist Party (APSP).

The oldest black power newspaper in existence, The Spear has published without interruption since the 1960s. Known as the "Voice of the International African Revolution," The Spear carries dynamic articles on the most pressing issues affecting the lives of African workers in the U.S., in Africa and around the world.

This is the only place you can find real political analysis of the crisis of parasitic capitalism, insight into world and local events and a focus on the realities and struggles in the heart of the 'hood. On its pages, The Spear tells you how to get organized, how to struggle and how to win.

The Spear puts out the real truth and fights for one liberated and united Africa as the birthright of African people everywhere.

TheBurningSpear.com is the online edition of the newspaper.

The Burning Spear's mission is to give voice to the struggles of the African working class from around the world, to unite and inform the struggles of African people and forward the International African Revolution.

The APSP recognizes that we are in a war of ideas. This is a war between the dying forces of white power imperialism and the emerging forces of African Socialism for the minds of the masses of poor and oppressed people.

Today Imperialism has constructed a media cartel that serves the interest of the white ruling class. This international media apparatus serves to justify the brutal oppression carried out by imperialism every day. Moreover, its objective is to ideologically unite the European nation at the expense of the African nation.

This imperialist media propaganda machine currently has a monopoly on the distribution of ideas. These ideas are intended to define our reality and shape our worldview. However, it is time for the African working class to speak for ourselves. It is time the world be seen from the perspective of the poor and oppressed masses.

TheBurningSpear.com is black power in the 21st century. It is the vision and voice of the African working-class. Our interest is to tell the truth; showing the world as it is. Our mission is to bring voice to the most oppressed and exploited sectors of the African world.

Finally, we understand that it is just a matter of time before the revolutionary ideals expressed here becomes a material force that will destroy imperialism and liberate Africa and her children dispersed throughout the world.

The Burning Spear recognizes that there is a war of ideas between the ruling class media and the media of the conscious African workers and other oppressed and colonized peoples of the world. Therefore we cannot rely on mainstream media, which is imperialist media, for truthful representation, analysis or leadership. Instead we, the oppressed African masses, must build and control our own media that consciously represents the interests of the poor and oppressed African working class.

The programmers and staff of The Burning Spear recognize the need for the African working class to have its own voice uncensored and uncontrolled by other forces, be they the white ruling class or their neo-colonial stooges throughout Africa and elsewhere.

We oppose programming that oppresses, criminalizes or slanders African people, and we are dedicated to creating programs that raise up and defend the African working class as the leadership of our people.

We oppose programming that oppresses or slanders African women, and we are dedicated to programs that raise up African women.

We recognize that African people are an oppressed people and that The Burning Spear and its programs are tools in the process of ending that oppression.

We are united in the purpose of raising the consciousness of African people through talk shows, news, music and other culture to facilitate the unification of African people as one people worldwide in the process of liberating Africa.

We are committed to developing self-reliant, community-controlled media capacity in the hands of the African working class. We take responsibility for the recruitment and training of forces from the African community into The Burning Spear.